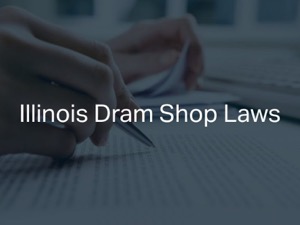 Drunk driving accidents are far too common throughout the state of Illinois. These incidents can lead to severe injuries for those involved, particularly innocent third parties. In most situations, we will find that the driver who was impaired by alcohol will be held liable for the incident. This means that the impaired driver will be responsible for covering the expenses of other parties who sustained injuries or property damage. However, there are certain circumstances where a third party could be held liable for providing alcohol to the person who caused the crash. Here, our Chicago drunk driving accident lawyers want to discuss the Illinois dram shop law.

What is the Dram Shop Law in Illinois?

END_OF_DOCUMENT_TOKEN_TO_BE_REPLACED

Earlier this year, the Illinois government made two changes to the law that may affect the incidence of drugged driving. First, possession of less than 10 grams of marijuana was changed from a criminal offense to a civil issue. Those possessing smaller quantities of cannabis are now subject to a fine of no more than $200. They no longer face criminal penalties, including jail time. The second change involves the definition of driving under the influence of marijuana. That crime is now defined as driving with 5 or more nanograms of THC in their blood, or 10 or more nanograms of THC in their saliva. The previous law allowed prosecutors to charge a driver with drug impairment if there was any amount of THC in their blood.

Whether these changes are a good idea depends, in part, on the connection between marijuana and other behaviors. When it comes to impaired driving, will deadly car accidents increase because more drivers feel free to use marijuana before getting behind the wheel? What is the connection between THC and unsafe driving? Without a solid understanding of how marijuana affects a person’s ability to drive, laws defining when a driver is “impaired” are simply guesswork.