On April 17th the U.S. Consumer Product Safety Commission (CPSC) issued an urgent warning about the dangers of the Peloton Tread+ treadmill after a small child was pulled under the rear of the product and killed.  At the time of the warning, the agency had linked 39 incidents to the Tread+ and stated that it posed serious risks to small children.  Those risks include abrasion, entrapment, fractures and – as evidenced in the tragic case mentioned earlier – death.

Peloton responded by calling CPSC’s warning “inaccurate and misleading.” Peloton’s CEO, John Foley, stated that the company had no intention of issuing a voluntary recall on the Tread+.

However, Peloton finally issued a recall on both the Tread+ and Tread Treadmills in early May and Foley apologized for not following CPSC recommendations sooner.  As of May 2021, the list of incidents involving the Peloton Tread+ had grown to at least 72.

While the Tread+ is not intended for children, it is designed for home use where children and small pets are likely to be present.  Should Peloton have understood the risks involved with the Tread+ and designed a safer product?

The answer appears to be yes.

We analyzed 10 years of emergency room data, from 2011-2020, to see how common exercise equipment injuries are, and how dangerous treadmills and the Tread+ are by contrast.

We found that not only are treadmills responsible for more emergency room visits than any other class of exercise equipment, but young children make up a significant portion of those visits. In fact:

This data suggests that the risks treadmills in general pose to children are well established and should have been understood.

While our analysis was conducted through the lens of the Peloton Tread+ recall situation, we looked broadly at injuries associated with similar finiteness equipment.  This includes bench presses, elliptical machines, rowing machines, stair steppers, treadmills, and stationary bikes.

Treadmill-related injuries resulted in the most emergency room visits (5,982), followed by stationary bikes (1,630) and bench presses (917).  13 percent of all reported treadmill injuries required patient hospitalization; only stationery bikes had a higher rate of hospitalization – albeit on much lower injury volume.

As previously mentioned, treadmills are not intended for children – but they are often found in homes where children may be present.  Unfortunately, children under the age of 10 make up 22 percent of all treadmill-related injuries. However, injuries to children are usually minor or moderate.  According to NEISS data, 94 percent of children who visited the emergency room were treated and then released.  Only four percent resulted in hospitalization for kids ages 10 and under, compared with 17 percent for adults over the age of 20. 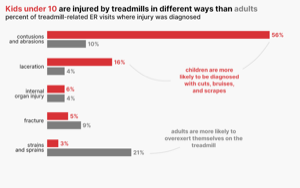 In general, adults are more likely to get injured while exercising, while children are prone to injury through falling, playing with the equipment, or getting caught in it.  For adults, strains and sprains are the most common, followed by contractions, abrasions, and fractures. For children, contusions and abrasions are the most common, followed by laceration and internal organ injury.

Children fall while on or near a treadmill all the time, but their injuries are almost never fatal. Given this, it is particularly tragic that a child died from getting caught by the tread in the Peloton Tread+ case. 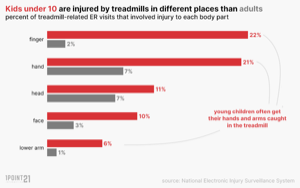 How Common Are Treadmill Recalls?

In the U.S., there have been a total of 11 treadmill recalls – the most recent in 2008.  The Tread+ has more reported injuries than all of them combined. 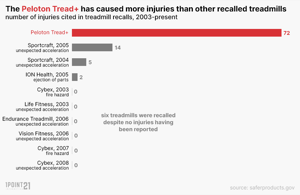 We also found that prior recalls were issued for problems far less serious than those reported for Peloton’s Tread+. There were no deaths reported for past recalls. In fact, Peloton’s Tread+ was the first reported incident directly resulting in death – and it did not lead to an immediate recall.

In the past, treadmills were recalled for the following reasons:

One of the earliest treadmill recalls came in 1998. Pacific Scientific recalled over 71,000 treadmills to prevent injury from an electrical short that can occur in the treadmills’ motors. In 2008, Cybex voluntarily recalled 20,000 treadmills for potentially increasing speed without request, though there were only 24 incidents and no injuries or deaths reported. Before Cybex, there were six other treadmill recalls issued for the same reason: the unexpected change of speed. In most of these cases, few reports of incidents and injuries preceded the recall, with the exception of Sportcraft’s 2005 recall. Sportcraft received 110 reports of unexpected acceleration – with 14 incidents resulting in injury.

While injuries are relatively common in incidents involving fitness equipment in general, deaths are exceedingly rare. In fact, the NEISS database only shows 14 treadmill deaths. However, most weren’t caused by the treadmill itself. In 12 of the cases, the cause was cardiac arrest. In one case, a woman fell and hit her head on the treadmill.

The fact that the Tread+ has killed even one child is significant – and likely should have triggered a recall to address the safety issue.  This fact looks increasingly more obvious given the relatively high number of injuries – especially compared to other treadmills that have been recalled.

We examined 2011-2020 data from the National Electronic Injury Surveillance System (NEISS), which records every consumer-product-related emergency room visit in 100 hospitals across the U.S.

In our analysis, we focused on exercise equipment-related injuries including the following machines:

We did not include free weights in our analysis.