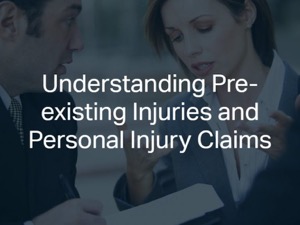 If you or a loved one have been injured in an accident caused by the careless or negligent actions of somebody else, you should be entitled to compensation for your losses. However, if you have a pre-existing condition or have sustained an injury in the past, this could lead to complications when you are working to obtain the compensation you are entitled to. Here, our Chicago personal injury lawyers want to discuss how at-fault parties and insurance carriers may be able to use pre-existing conditions against you in your personal injury claim.

Why Would A Pre-existing Injury Affect A Personal Injury Claim?

It may seem logical that insurance carriers and at-fault parties should only focus on a victim’s current injuries in the event a serious accident occurs. However, it is important to understand that any pre-existing condition or prior injury that a victim has sustained in their lifetime could be used against them to justify paying a lower settlement or denying a claim altogether.

Insurance carriers are typically going to be “for-profit” entities that do anything they can to lower the amount of money they pay in a settlement to an injury victim. Unfortunately, one of the tactics they use to justify denying a claim or lowering a settlement is obtaining information that the injury victim may not have sustained their injury in the incident in question. Insurance carriers and at-fault parties will try to show that the victim’s current pain and suffering already existed.

Injury Victims Should Still Be Entitled To Compensation

While the above scenario is how insurance carriers may approach the situation, the existence of a pre-existing condition should not mean that a victim is unable to receive compensation in the aftermath of Sustaining an injury caused by somebody else.

Nobody is going to argue that an at-fault party or their insurance carrier should pay for injury damage is that they did not cause. However, at-fault parties should certainly be on the line for covering any new injuries caused by their careless or negligent actions as well as pre-existing injuries that are exasperated- due to their actions.

In order to recover compensation for these cases, injury victims must be able to prove the liability of the other party involved. It is highly recommended that any person injured due to the actions of another party seek assistance from a skilled attorney who can use their resources to investigate every aspect of the case. An attorney understands how pre-existing conditions could affect an injury claim and will work to obtain maximum compensation for their client.