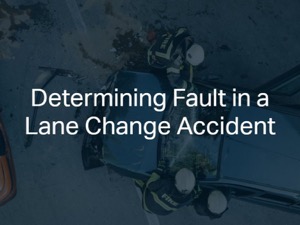 Lane changes are perhaps one of the most dangerous things that a person can do on the roadway. Even though changing lanes may seem like a routine procedure, the reality is that there is a certain amount of care and skill required to safely carry out these maneuvers. Unfortunately, accidents involving lane changes are not uncommon throughout Illinois. Here, our car accident lawyers want to discuss who could be at fault when a lane change accident occurs on highways or local roadways.

Anytime a vehicle accident occurs, we will typically find that the police will respond to the scene and conduct a preliminary investigation. This often results in one driver being found at fault for the incident. However, it could be the case that multiple drivers share responsibility for causing the crash, but in varying degrees. This can all be confusing when it comes to securing compensation through an insurance settlement.

When a driver is seeking to make a lane change, they need to activate their turn signal pointing in the direction that they want to go. This lets other drivers know the lane change driver’s intentions. The driver wishing to make the lane change is responsible for checking their mirrors and blind spots to ensure that they have a clear space before they proceed.

So, when could a driver be at fault for making a lane change? There are actually a few scenarios where the driver changing lanes could be found at fault, including:

In general, any driver that moves their vehicle into a lane of traffic will be at fault for an accident that occurs from them entering that lane. However, there are some scenarios where more than one driver could be cited and share fault for the incident, including:

Merging Into Traffic From One Type of Road to Another

Another common time when vehicles will have to change lanes is when they are merging from one type of street to another, such as merging from a city street onto a highway or from one highway to another highway. In these situations, any driver wishing to merge is required to yield the right of way to vehicles already on the street that they wish to merge to.

When a driver wants to merge into a new lane, they are required to activate their turn signals and wait until there is an opening in traffic that they can get their vehicle into. Sometimes, the merging vehicle has to come to a complete stop and wait for a traffic opening. Drivers already in the other lane have no obligation to move over or slow down for drivers wishing to merge.