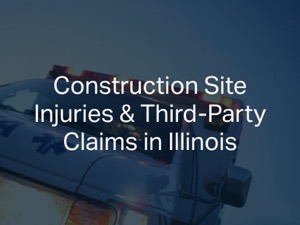 Accidents occur at construction sites with regularity. Despite stringent regulations about workplace safety in construction areas, the reality is that there are going to be times when injuries occur. In most situations, a person injured on the job at a construction site will be entitled to workers’ compensation insurance to help pay for their medical bills and lost wages. However, there may be times when it is appropriate for an injured worker to file a third-party personal injury lawsuit in order to recover compensation for their losses. Here, our Chicago construction site accident attorneys want to discuss when a third-party claim may be possible.

Most Construction Injuries are Handled Through Workers’ Comp

The workers’ compensation system in Illinois is relatively robust and provides compensation to those who sustain on-the-job injuries. Workers’ comp will typically cover all medical expenses related to an injury as well as a significant portion of any income lost if a person cannot work while they recover.

Typically, the workers’ compensation system prevents an injured employee from filing a lawsuit against their employer. However, there are other parties that could face a lawsuit if their actions caused a construction accident injury.

When is a Third-Party Claim Appropriate?

Some of the other parties that could be held liable in the event a construction accident injury occurs include the following:

The reality is that there are typically many other parties involved in construction projects aside from an overall large construction company. Even though an employee may be working with coworkers from the same company, they typically operate on the same construction site with many other individuals who may not work for their company. Additionally, construction workers use tools for every aspect of their job, and if any of these tools are defective, severe injuries can occur.

If any party other than an employer causes a workplace injury at a construction site, a third-party lawsuit will likely be entirely appropriate. One of the benefits of a third-party lawsuit is that an injured worker will typically be able to recover more compensation than they would otherwise be able to recover through workers’ comp. This includes pain and suffering and emotional distress damages, both of which are excluded from workers’ comp claims.

Can You Still File for Workers’ Compensation Benefits?

Injured construction workers in Illinois will have the right to file a claim in the state workers’ compensation system even if they file a third-party lawsuit against another individual or company for the same claim. Injured individuals will not have to choose one or the other, so long as they have a viable third-party claim. However, it may be necessary for an individual to repay some of their workers’ comp benefits in the event they are successful with their third-party claim.

Claims made in the workers’ compensation system are considered “no-fault.” This means that an injured worker can recover compensation regardless of who caused the injury, be it themselves, a coworker, or the condition at the job site. However, when a third-party lawsuit is filed, it will be necessary for the injury victim to prove the negligence of the alleged at-fault party in order to successfully recover compensation.

Additionally, it is important to point out that the Illinois personal injury statute of limitations is two years from the date an injury occurs. If an injured construction worker fails to file a claim against a third party within this two-year timeframe, they will lose the ability to recover additional compensation outside of their workers’ comp claim.