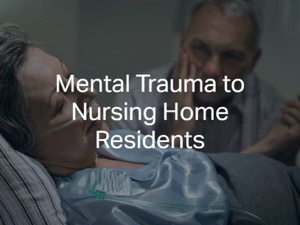 Inside of a nursing home, abuse can occur in a variety of ways. This includes physical abuse and sexual abuse, as well as a neglect of basic necessities. However, nursing home abuse can also include emotional and psychological trauma.

Signs And Symptoms Of Mental Trauma In Nursing Home Residents

The mental trauma a nursing home resident endures may not be immediately apparent to family members and friends. However, there are various signs and symptoms of mental abuse that loved ones need to be on the lookout for. This can include, but is not limited to, the following:

Family members and friends of nursing home residents should also be suspicious if their loved one exhibits signs of fear or anxiety around certain caretakers. This could be a sign that they have sustained some form of abuse.

Because mental and emotional abuse is often linked with physical and sexual abuse or neglect, loved ones of those in nursing homes should also regularly check for physical signs and symptoms of abuse. This can include unexplained bruising, broken bones, bedsores, or obvious signs of neglect.

It may not be possible to prevent every form of nursing home abuse, but it is advisable to check in as often as possible with loved ones inside of nursing homes. Even if you cannot be there in person on a regular basis, you should schedule a regular phone call or video chat to connect with your loved one. Nursing home staff members will be much less likely to abuse those who have active friends and family members checking in on them.

If you suspect that your loved one has suffered from any kind of abuse in a nursing home, including mental trauma, you need to speak to a Chicago personal injury attorney as soon as possible. An attorney will work with law enforcement officials and state regulatory agencies to conduct an investigation to determine what happened.