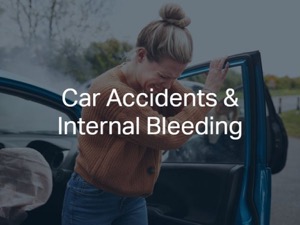 Nobody ever expects to get into a car accident, but the reality is that these incidents are not uncommon in and around the Chicago area. Most car accidents result in only minor injuries, and victims are able to make a full recovery within a short period of time. However, some car accident injuries are severe and leave victims with significant disabilities.

According to the Illinois Department of Transportation, there were 319,146 total traffic collisions across the state during the latest reporting year of data available. The DOT also states that there were 94,164 total injuries and that more than 11,000 of those injuries were considered catastrophic.

Internal bleeding can be caused by any number of mechanisms in a car accident. First, any broken bone can result in the release of blood into the body. Broken bones can damage blood vessels or even arteries around the injury site.

Blunt force trauma can also lead to various types of internal bleeding. When a collision occurs, passengers are often thrown against the steering wheel, the dashboard, or other hard internal parts of a vehicle. This can compress or rupture internal organs, blood vessels, or arteries and cause internal bleeding.

Finally, deceleration trama can shift the internal organs of a person’s body in a car accident. While the body may be restrained by a seat belt, a person’s organs can still shift forward, causing them to bounce around inside of the body.

Any of the bleeding caused by the mechanisms mentioned above can go undetected for long periods of time. The more blood a person loses internally, the more they risk sustaining long term injuries and even disabilities.

What to do After Suffering Internal Bleeding in a Car Accident

Internal injuries, including internal bleeding, can occur even after minor car accidents. Because a victim may be unaware that they have sustained internal bleeding, it is incredibly important to seek medical assistance after any car accident. A doctor may be able to recognize whether there are any hidden or delayed injuries that a victim needs to be aware of. Do not avoid medical treatment after a car accident just because everything appears to be fine.